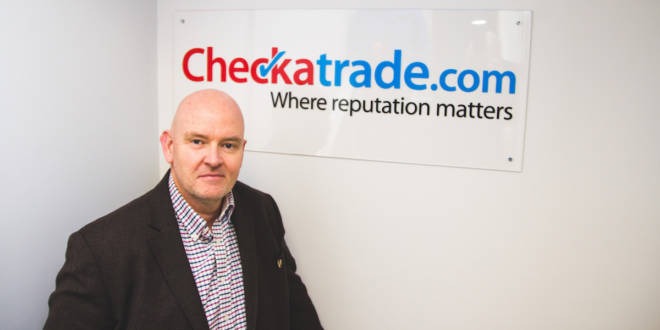 Skill Builder meets Kevin Byrne founder of  Checkatrade to find out what makes his organisation tick.

The number of  initiatives introduced to curtail the activities of  rogue building trades over the years has been plentiful. It seems like the beast that will not die. Selsey based Checkatrade stands among the few that, have not only stayed the course, but, appear to be gaining public trust. So our first question to Kevin Byrne was “How have you succeeded where so many have failed?”

Expecting him to reply with words such as ‘determination and staying power’, the conversation took an unexpectedly philosophical turn. He spoke, not just about overcoming physical obstacles, but psychological barriers and the importance of investing in people rather than just building a business to make money. He also observed that the most successful businesses and products are those that solve a problem; find the problem, work out how to solve it and the money will follow.

As with many businesses the point where they become noticeable to the general public is really the tip of the iceberg and it is all too easy to see this as overnight success. Most of the hard work and preparation takes place unseen and for Kevin that was happening over several years in a garden shed while he held down three jobs.

Kevin’s initial involvement came when he was trying to drum up a bit of business for his own small business in Bognor-Regis which he attempted to do by publishing a local directory of reliable tradespeople. It seems commonplace now but he says back then Thompsons and Yellow Pages had things sewn up but nobody knew which businesses they could trust. Around that time a tornado hit the town, which might seem like a freak event but Bognor has seen two tornadoes. On both occasions the misery brought by the event was compounded by a number of unscrupulous tradesmen who descended on the area to find easy pickings among the beleaguered population.

So at that point Kevin’s  focus shifted from drumming up business for small traders to helping tornado victims avoid the cowboys. The more he looked at it the more he realised that, tornadoes aside, there was no really effective way of people finding a  reliable tradesperson. To provide one now seems like a simple enough proposition but achieving it is a lot more complex, because the customer and the members need to have equal confidence in it. If an organisation set up to avoid cowboys becomes their domain it will achieve the opposite effect. This means that trades need to be properly vetted and, having been vetted,  continuously monitored and reviewed.

Of course we are now used to the idea of consumers giving feedback but when Kevin started with his initial local group of  reliable trades it was unheard of. It was also viewed with hostility by the trades because they felt, perhaps with some justification, that such an organisation was giving a platform to what we might now call ‘cowboy customers’, whose real objective was to gain a reduction in the bill.

Checkatrade was initially viewed with hostility by the trades because they felt, perhaps with some justification, that such an organisation was giving a platform to what we might now call ‘cowboy customers’, whose real objective was to gain a reduction in the bill.

So he realised that protecting the consumer was only ever going to be possible if he also gave fair representation to the tradesperson, something that consumer programmes on the television rarely, if ever, do. Given that it is the members rather than the customers who pay Checkatrade this was also a matter of commercial survival. If a tradesperson receives negative feedback they have the opportunity to respond and resolve the matter. If the customer doesn’t accept this and insists on posting negative feedback then the tradesperson must take this as part of the process. Hopefully they will manage to raise their average score by getting higher marks on subsequent jobs. The ultimate sanction is being removed from Checkatrade.

Kevin realised that protecting the consumer was only ever going to be possible if he also gave fair representation to the tradesperson, something that consumer programmes on the television rarely, if ever, do

There was also the question of  who checks Checkatrade? To solve this one he went to Trading Standards and by paying them to come in once a month and spend a day going through his activities, which means checking new members and also looking at the handling of any disputes, he has been given their approval.

All this activity is voluntary and, of course, costly and it follows that anyone setting up such a body to make a quick buck is never going to go to this trouble. Making the public aware of just how much work goes into making sure that Checkatrade members deliver the right results is not easy.

There are tradespeople (criminals) who put the logo on the side of their van and don’t even bother registering so the message to the customer has to be check the website to make sure the person that claims to be a Checkatrade member is one.

The other principle that applies in all business is that bad news travels faster than good news.

Two separate disgruntled customer took their grievance to the BBC’s Watchdog and, in true Watchdog style, they produced a damming report which, according to Kevin, was completely unjustified. The disputes had been settled long before any television involvement but Watchdog still  claimed a scalp.

It is doubtful that it would ever be possible to produce a list of tradespeople that have had a 100% success rate. The building industry is far too complex and variable for it ever to be dispute free.

This is not to say that Checkatrade has no blemish on its record but it is a small percentage of complaints. It is doubtful that it would ever be possible to produce a list of tradespeople that have had a 100% success rate. The building industry is far too complex and variable for it ever to be dispute free. What matters is how disputes are dealt with and, once again, Trading Standards scrutiny provides reassurance. Checkatrade like all such organisations relies on members fees and they have a vested interest in not getting rid of members, but they also have to make sure that they only retain people who enhance their brand.

This is all part of Kevin’s drive to have the best trades on board. With experience of how damaging the slightest indescrepancy can be and in the face of increasing competition Kevin is trying to steer the organisations towards a position where they can provide a guarantee for their members’ work. He admits that he doesn’t know quite what this model will look like yet but he firmly believes this is the future of schemes such as Checkatrade.

Kevin tells us that being a member of Checkatrade is worth an average of  £100,000 per year and for many the inclusion in the local Checkatrade directory brings in all the work they can handle. This may be a sales line but his membership is growing so whatever the figures there is a growing band of  people who believe they can get a good return on the membership fee. Of course in an ideal world we would probably ask friends for recommendations but these days people tend to move around more than they did and they also now rely upon the internet to find goods and services so the need for a reliable list of people you can trust to do a good job is even more valuable than ever and the need to look after that list is the key to continuing growth.