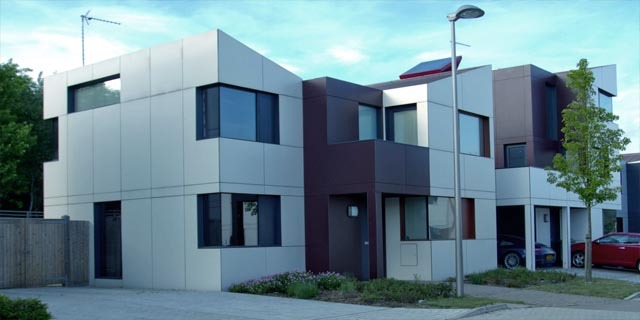 My heart goes out to the people who bought homes in Oxley Woods. These modern style houses on the outskirt of Milton Keynes started life with such promise. For a start they were designed by a partnership that included Richard Rogers. They were bold, bright and beautiful, built from prefabricated panels with sleek lines and maintenance free exteriors. No more boring old brick. The people who managed to snap up these iconic homes could rightly have felt pleased with themselves, but all that changed when the rain came in. At first the builders tried to fix the problems with mastic. It is a standard approach for many leaks. ‘Squirt a bit more gunk in there’ but it soon became clear that there was a deeper flaw.

The case has now gone legal with the usual finger pointing and buck passing that leaves the home owners feeling abandoned and trapped in homes that, for the foreseeable future, they have no way of recovering their investment on.

I won’t be so bold as to prejudge the outcome but I would say that, as much as I love modern architecture and particularly the work of Rogers, and those other great British architects in his group who have built some of the most iconic buildings of our times, I would have been very wary of buying one of these homes.

To my mind they got a bit too cocky and ignored time honoured practices that have served us well. The best thing you can do with rainwater is to get rid of it as quickly as possible. That means pitched rather than flat roofs, big overhangs as seen in Alpine chalets and gutters with downpipes on the outside of the buildings.

The designers of the Oxley Woods homes presumably considered these highly functional features to be ugly or boring because their designs have none of these things. That only becomes a problem when it rains.

Roger Bisby is an English television presenter and journalist, known for his expertise in the British building industry.
Previous How to Make a Fake Wall with Brick Effect Render
Next Product review: DeWalt DCS331M2 cordless jigsaw