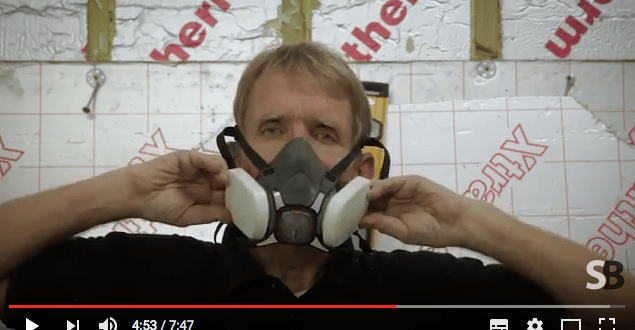 November 16th is World COPD Day, an event held each November to raise awareness of COPD worldwide. Sadly tradespeople are seriously affected by this disease with exposure to construction dust still a significant cause of COPD.

See Skill Builder’s video about the JSP Force 8 half mask for some useful tips on how to protect yourself against dust.

World COPD Day is organized by the Global Initiative for Chronic Obstructive Lung Disease, or GOLD (www.goldcopd.org), a World Health Organization collaborative and 501(c)3 organization. This year’s World COPD Day theme, “Breathe In The Knowledge,” emphasizes the meaningful actions patients can take to improve their respiratory health, at any stage before or after a COPD diagnosis.

COPD is diagnosed using a breathing test called spirometry. This test, which is painless and takes only a few minutes, measures the amount of air a person can breathe out, and the amount of time taken to do so. Researchers are also studying additional ways to identify COPD earlier in the course of disease.

The early stages of COPD are often unrecognized, in part because many individuals discount symptoms such as breathlessness, chronic cough, and bringing up phlegm as a normal part of getting older or an expected consequence of cigarette smoking.

There is no cure for COPD, which may also contribute to underdiagnosis of the disease. People whose breathlessness is more severe may find the possibility of finding out that they have COPD frightening, and avoid seeking treatment.

COPD occurs most often in patients who are over age 40 and who have a history of exposure to COPD risk factors. Worldwide, the most commonly encountered risk factor for COPD is cigarette smoking. Other important risk factors include dusts and chemicals encountered on the job and smoke from biomass fuels burned for cooking and heating in poorly ventilated dwellings, especially in developing countries.

Patients may be able to slow or even stop the progress of COPD by reducing their exposure to risk factors for the disease. “For people who smoke, the most effective strategy to prevent COPD or slow its progression is to quit smoking,” says Dr. Claus Vogelmeier, Chair of the GOLD Science Committee. “It’s never too late to quit smoking.”

In addition, GOLD leaders emphasize that not just cigarettes but other forms of tobacco smoking such as water-pipe smoking are dangerous for the lungs. And because the potential damaging effects of E-cigarettes in the lungs are unknown, these should be considered like regular cigarettes until more information is available. Likewise, the role of E-cigarettes in helping smokers quit is not yet established.

Without treatment, COPD is generally a progressive disease, and as the disease gets worse patients become breathless during everyday activities such as climbing a flight of stairs, walking the dog, or even getting washed and dressed in the morning.

COPD treatment is most effective when begun early in the course of the disease. However, at all stages of disease, treatments are available that reduce symptoms such as breathlessness and enable people to participate more fully in daily life.

Roger Bisby is an English television presenter and journalist, known for his expertise in the British building industry.
Previous Three fined after man loses life in fragile roof fall
Next Some boots aren’t made for working: Outdoor workers complain of wet feet, blisters & chillblains