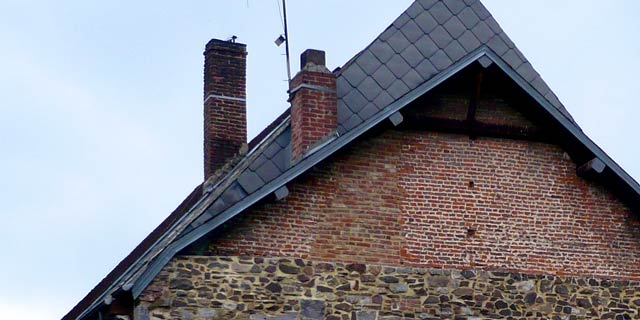 It might seem like a busman’s holiday but whenever I’m out enjoying myself, I still can’t stop looking at buildings. Now comes the bit where I inflict my holiday snaps on you and if you are well brought up you say “nice” but anyway feel free to comment.

The first is someone’s ingenious attempt to protect a gable end wall from the weather. This is a common problem where a building has been demolished leaving another to face the elements. Many people do a bit of vertical tile hanging but this builder has left part of the roof of the demolished building and supported it on cantilevered purlins. Nothing too unusual about that I suppose but look at the chimney.

It’s hanging in mid air. What possible reason could there be for leaving it there, and what is supporting it? This is not a glass fibre fake chimney; there is half a ton of brickwork up there.

It just looked wrong. If you are going to fake something you do it properly or don’t bother…

On the subject of fake chimneys, which some house developers think adds character to their new homes, I saw one a while back that was clearly a fake. You could tell because you could see straight in through the bedroom window and where the chimney breast should have been there was the open space of a large bedroom. It just looked wrong. If you are going to fake something you do it properly or don’t bother.

The second picture I wanted to show you is a slate roof in Luxembourg. There are many fine examples of slate work in Northern Europe particularly the numerous church domes. It seems that slaters just can’t resist trying to outdo each other.

On this roof they have not only swept up the cheeks of the dormer windows but the whole slate roof has been run at an angle rather than being parallel with the ridge. I could see no practical reason for doing this but then I started wondering if it’s something to do with snow and ice. Slates laid on the slant are less likely to be dragged down if the snow slides off. Each one is held by the one below. I have no way of knowing if this is the reason and I can see nothing in the roofing manuals that supports this theory so perhaps they were just showing off after all, and there is nothing wrong with that. Perhaps that’s also what the chimney is all about.

Roger Bisby is an English television presenter and journalist, known for his expertise in the British building industry.
Previous Indecent Exposure
Next Deal or no deal