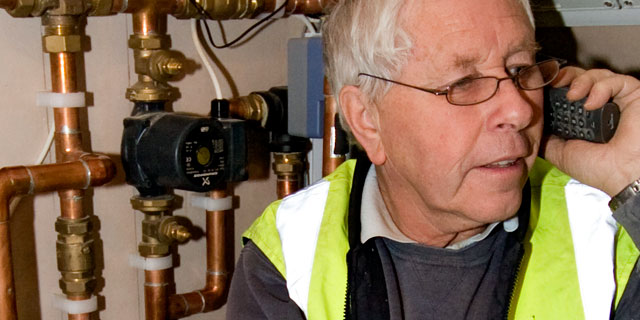 The golden rule that I have followed through years of fault finding is ‘never assume and never jump to conclusions’. OK that is two golden rules but the basic message is never say you know something until you prove it. This has stood me in good stead where other tradesmen have come and gone from a job missing one small fact that changed everything. This is not superior wisdom just hard won experience from getting it wrong. And sometimes I still get it wrong as this job proves.

I had been called out to look at a fault finding leak around the bath. It is almost always due to a defective silicone seal but I didn’t just assume that. I checked it by spraying water all around the edge of the bath. Sure enough the water poured down. Positive proof!

The leak had been going for some while and made a real mess. We got the job to take the bath out and renew the rotten chipboard floor and cover the walls with Knauf Aquapanel before re-tiling. This was the fourth flat in the block to suffer from these problems and it had caused bad feelings among the owners so this customer didn’t want any further trouble from his bathroom. He didn’t mind paying for a good job but he wanted a guarantee. Now I know there are some plumbers who would not put their name on a piece of paper that says ‘this won’t leak’ but I was 100% confident.

Firstly we were going to renew the floor, and then we were going to get rid of the plasterboard at the shower end and put up some tile backer board. We were also going to beef up the stud work to prevent any movement. Then we were going to tile the floor under the bath so the tiles came right up to the wall. The Ardex shower waterproofing system would then be used to make a damp proof membrane that ran down the walls behind the bath and onto the floor so any leak would not be able to seep down under the floor.

There would be a silicone seal between the bath and the wall and then another silicone seal after the wall had been tiled. It was near enough a week’s work to do this but I told the customer that I was sure after all that it wouldn’t leak, but if it ever did (which I doubted) he would know about it because the water would seep out from under the bath panel and appear as a puddle on the tiled floor. This might seem like belt and braces but it is actually standard practice on the Continent, we are almost alone in ending the tiles just under the bath panel.

We obviously tested the bath waste and even replaced the flexi tap connectors just for good measure. I have heard too many horror stories about flexis springing a leak and would never use them in a flat. We finished on Friday lunchtime and everything looked good. That weekend I received a text saying that a puddle had appeared on the bathroom floor.

It was Sunday morning but I went straight over. The leak appeared to be coming from the bath waste so I took it apart. There were traces of Plumber’s Mait on the underside of the waste which indicated that this had been a previous problem which someone had tried to fix. We had obviously disturbed a bad repair. Plumber’s Mait is not suitable for bedding in wastes of any sort but thousands of people use it for this job every year. If you ask Evo-Stik, the manufacturers, they will verify that it is unsuitable for wastes. If you need a sealant for wastes then silicone is much better.

I removed all of the Plumber’s Mait and, because the rubber seals looked fine left them to do the job they were designed to do. I ran the bath and it looked OK. Monday morning I got another text ‘Bath still leaking, please fix today’. This time I decided to renew the whole pop up waste assembly. It looked fine. Monday night text number three ‘still leaking, pissed off’. Looking on the positive side at least the idea of tiling up to the wall and sealing the wall to floor joint had paid off with an early warning of what was really a small leak. If we hadn’t done this then the people in the flat below would have been the first to know.

I went back to the bathroom and after half an hour of having the bath full of water and nothing coming out, I wondered if the problem was more to do with the person using the bath than the bath itself. He was a big guy and I wondered what difference it would make if you had another 110kg in the bath. It all seemed solid but would things start flexing? My problem was how to simulate this. I certainly didn’t want him sitting in the bath while I crawled about with a torch even if he was willing. It would take a month of Sundays to get that image out of my head. I lay there, head on the floor, deep in thought. It was at this point that the torchlight caught a single silver drop of water. It wasn’t coming from the waste; it was coming from the glass fibre of the bath. I pushed it with my finger and a few more drops came down. I discovered that the bath was spongy. I could actually push a blister of water around. Clearly it had leaked through the acrylic top and been trapped by the reinforcing coat of glass fibre. I shone the torch down through the water and there it was a hairline crack. The one thing I hadn’t proved at the outset was that the bath was watertight. Because 95% of leaks on baths turn out to be from around the silicone seal I had jumped to the conclusion that it was the cause and I hadn’t looked at a secondary cause.

The task now was to remove the damaged bath (easy with a recip saw) and then fit a new bath without damaging all those lovely new tiles or the new bath. That was slightly trickier because it was a snug fit. The customer, obviously not expecting to lose weight any time soon, decided to go for a steel bath. Good choice in his case. When we cut that old bath in half you could see the weak spot. It was all along the edge of the chipboard reinforcing panel where the inner acrylic joined the outer glass fibre. There was a triangular void all the way along both edges. It was inevitable that it would fail fat bloke or not, but the fact that the percentage of obese people in Britain has now reached epidemic proportions means that plumbers will be busier with this kind of work.

Roger Bisby is an English television presenter and journalist, known for his expertise in the British building industry.
Previous Carbon Monoxide Poisoning
Next Building Site from Hell