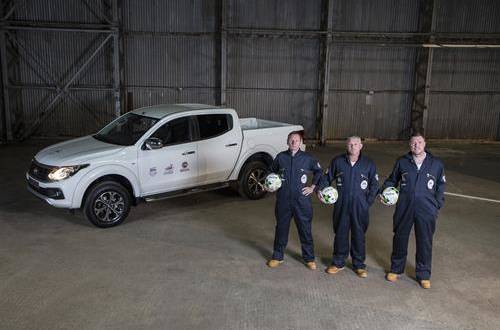 Fiat Professional, official partner of The Football League, has today launched the Fiat Professional Tradesman Trials, a nation-wide search to find a tradesman who has the talent to make it as a professional footballer.

The move from the trades to professional football is a well-trodden path.  There is a long list of past and present players starting out as tradesmen including current Southampton striker and ex-Burnley and Queens Park Rangers striker, Charlie Austin who was a builder and former Wigan midfielder, Jimmy Bullard who worked for his father’s painting and decorating company before he hit the big time.

Tradesmen who think they’ve got what it takes to win the one month trial at a Football League club have until 12th June to showcase their skills by submitting videos of their footballing talent to www.tradesmantrials.co.uk.

The best entries will then be invited to attend a Tradesman Trials day, in association with The Football League that will take place by the end of June, where they will be put through their paces in front of a selection of scouts and Fiat Professional’s football ambassadors. The winner will then select his preferred club from those signed up to the campaign and receive a £2,000 prize.

The series of challenges included plastering, painting and wallpapering, re-wiring a plug and building a brick wall. Ex-referee Dermot Gallagher was on hand to keep everyone in check throughout, while comedian Ian Smith provided commentary on the players’ efforts.

To view the Tradesman’s Challenge video and find out who won click here.

Stuart Pearce started his career as an electrician and continued to trade until the age of 25 alongside his professional football duties while Dean Windass was a hod carrier on a building site in Hull for 18 months.

Geoff Horsfield worked as a builder before he signed professional terms and has since returned to the building trade full time. The Geoff Horsfield Foundation was set up earlier this year to help accommodate vulnerable people with mental health issues in Birmingham. Geoff and the foundation renovate properties and provide ongoing support to help them get back on their feet.

Stuart Pearce comments: “When I first moved to Nottingham Forest from Coventry I advertised in the match day programme to get some extra income. I eventually stopped trading but Brian Clough never stopped bringing in his broken irons, toasters and kettles into the training ground for me to rewire!”

For tradesmen who don’t think they have what it takes to make it in professional football, Fiat Professional is also running a competition to win a Fiat Professional van for two years. The winner will be able to choose from any model in the current Fiat Professional range including the Ducato, Doblo’ and the brand new Talento, Fiorino and Fullback pick-up launching in June. This prize also includes servicing and maintenance.

Dylan Garton is a cofounder of Skill Builder and freelance video producer, camera operator and video editor.
@dylan_motion
Previous Suspended prison sentence for fraudulent gaswork
Next How to: Hide tv cables in the wall