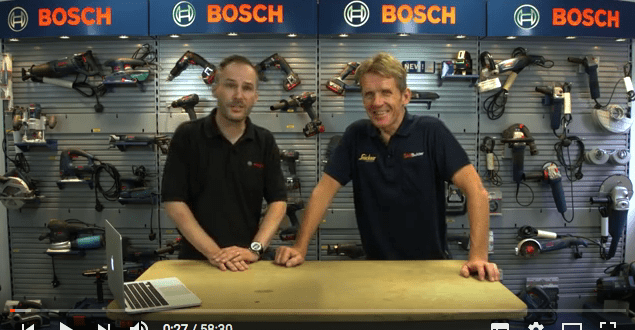 There’s been lots happening on the Skill Builder YouTube channel in 2016; here’s a few highlights.

In January 2016 we published the first part of the new 18v drill test which was first published in 2014. This time we split it into three parts looking at: Part 1 – batteries; Part 2 – flat bits; Part 3 – final results.

We took models from: Milwaukee, Hitachi, Bosch, DeWalt, Metabo, Festool, Panasonic and Makita and put them through their paces. See a chart summarising our findings here. The test continues to spark lots of debate among professional power tool users and thankfully lots of praise too with some calling it the best drill test on YouTube and lots of speculation over what we should compare next. Impact drivers are topping the request list currently – let us know if you have any other ideas in the comments below.

Elsewhere on the power tool front our Festool TS 55 REQ Plunge Track Saw review has proved popular since it was published in August and the good news is we have lots more Festool reviews planned for 2017. Due to popular demand there will also be more coverage of Hilti’s products on the Skill Builder channel in 2017. First up will be Hilti’s new 24 volt combi drill.

2016 also saw the launch of our  roadshow series bringing you live recordings directly from the premises of leading power tool manufacturers. We kicked the series off with a visit to Bosch and gave away a Bosch cordless 18v drill to say thanks for watching. We’ll be revealing our next destination very soon and there will be more tools to win.

We also recently gave away the Fein Supercut 18v tested in this video.

We have a growing library of How-To videos and articles on our YouTube channel and website with notable additions in 2016 including:

How to use Self Levelling (screed) Compound with Bostik.

How to fit a wall hung WC & basin with Abacus Bathrooms.

We will be expanding this library in 2017 with a whole series of How-To’s being brought to you in association with Abacus Bathrooms, and that’s just for starters.

At Skill Builder we love finding out about new products that can make tradespeople and self builders more efficient and 2016 was no exception. Five of the top new products we covered in 2016 were:

The Cladmad One Man Cladding Device

On a more sombre note, one of our most watched videos in 2016 was a video covering the topic of ladder safety which we published at the end of 2015 following a death on a site we had been working on. It caused us to reflect on the serious issue of height safety and how the smallest of accidents can have the most grave consequences and the message seemed to resonate with many viewers too. Health & Safety can be a hard sell but most tradespeople have had some serious near misses in their time so it’s an issue which warrants all of our attention.

We touched on some health and safety products in 2016, such as the Polyco gloves in this video, but along with workwear this is another area where we plan to bring you lots more content in 2017.

Thanks for subscribing to our YouTube channel, subscribing to our email newsletter, watching, following, commenting, liking and sharing in 2016. We’re constantly evolving and striving to make better content so your feedback is invaluable and we always love hearing about the times we’ve informed or even inspired you.

If you’re interested in working with us in 2017, please don’t hesitate to get in touch via our contact us page – we’ve worked with more than one company who has told us that a Skill Builder video was the single most effective piece of marketing they ever undertook.

Dylan Garton is a co-founder, video producer and editor for the Skill Builder social media platforms.
Previous Construction industry predictions for 2017
Next What’s happening with Skill Builder in 2017?