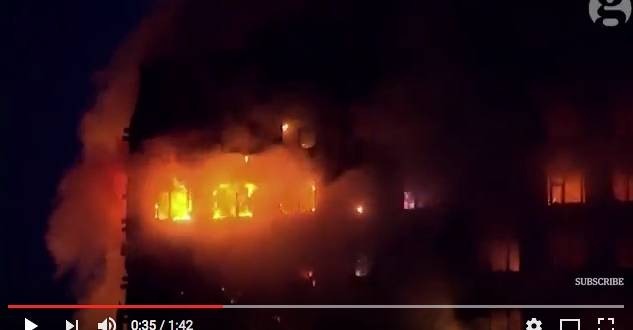 Shocked witnesses have described seeing people jump from as high as the 15th floor of Grenfell Tower in London as flames engulfed the building last night.

Over 200 firefighters attended the 27-storey building near Ladbroke Grove just after 1.15am as fire tore through the block of flats.The cause of the fire is still unknown but according to witness accounts there are fears that the exterior cladding may have played a role in the fire’s rapid spread.

The building has recently been refurbished at a cost of £8.6 million which included an upgrade to the exterior cladding. A resident of the 17th floor of the block, named as Methrob, told LBC Radio the “real issue was when it caught fire to the cladding outside”. He said: “That’s when I noticed the fire from outside when I looked out the window.

“By the time that we got downstairs, the fire had gone all the way up and it was just about reaching our windows on the 17th floor.”The whole one side of the building was on fire. The cladding went up like a matchstick.”