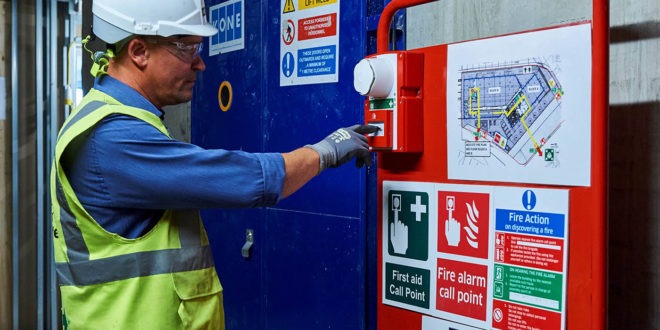 Fitting a temporary fire alarm during construction activity can save lives, prevents costly delays, and protects your investment, facts supported by a growing number of industry bodies.

The call comes after a fire in January at one of the world’s largest vaccine producers killed five workers in Pune, western India.

The blaze started at a new factory building, adjoined to Covid-19 manufacturing facilities, that was still undergoing construction and indications are that it was caused after insulation material caught fire during welding works on site.

Aside from the tragic loss of life, it is estimated that the blaze caused delays of new product launches and a revenue loss of more than 10 billion rupees (£100 million) due to equipment damages. It is understood that the family of those who died were also offered compensation.

A spokesperson from the company confirmed that the production of the Oxford-AstraZeneca vaccine would not be affected by the blaze, although it is a stark reminder of the dangers and disruption posed by fire. What would have happened if the fire spread into existing vaccines manufacturing facilities?

In the UK alone it is estimated that there are around 10,000 fires on construction sites each year, yet it is still common to rely on fire wardens seeing the fire and then manually sounding an alarm.

In reality, early stages of a blaze often go undetected because the flames and smoke are obscured by other site materials or begin in remote areas. This results in vital lost minutes, which can lead to more serious consequences like what happened in Pune, India.

Guidance does require construction sites to have a waking watch or fire warden during “hot work” (welding, burning, riveting, grinding, or the use of a tool that produces a fire or sparks).

However, this is prone to human error and the unpredictability of fire; How long does a spark smoulder before ignition, how long does the person remain ‘watching’ the area after the hot work is completed? Who is watching for ember ignition when the site is vacated at the end of the day?

Bear in mind, too, these waking watch guards usually raise the alarm if they spot a fire using an air horn – hardly an efficient way of alerting co-workers.

All this whilst the fire is spreading, creating the potential for human error – anyone can make mistakes, especially when under pressure, for example, if they themselves feel in harm’s way.

The only effective method of addressing all these issues is to use a temporary wireless evacuation and fire detection system.

Aside from ensuring workers evacuate site as soon as a fire is detected, these technology-based fire alarm systems protect client’s assets from devastating financial consequences, including shareholder and reputational damage, because the blaze can be tackled sooner.

John Harrison, Sales and Marketing Director from Ramtech Electronics, said: “The risk of fire on construction sites is ever-present, and this example at the vaccine factory illustrates the terrible consequences. Temporary evacuation systems – wireless is preferred by many because it is quick and easy to set up – could have avoided this tragedy.”

He added: “With more companies in the pharmaceutical industry ramping up production and extending their facilities, we encourage them all to look at the benefits of temporary wireless evacuation systems.

They are relatively inexpensive; they can even be hired for the duration of the construction project, yet have the potential to save lives and protect businesses from huge financial costs.”

These automatic detectors are supported by manual call points that can be triggered by any person. Medical alerts add further functionality allowing rescue teams to be deployed immediately to a specific site location, again saving valuable minutes.

Systems are available that have a three-year battery life, so little or no maintenance is required, whilst automatic detection eliminates human error.

When specifying a wireless fire alarm system, it should be compliant to EN 54. Innovation in internet connectivity, apps and the ability to collect, analyse and interpret data in live stream have extended functionality.

Thousands of Ramtech WES wireless fire alarm systems are currently in use protecting key sites for over 75 per cent of the UK’s top 100 construction companies as well as across Europe.

The technology has protected projects as diverse as the Leadenhall Building and Crossrail in London, Heathrow Airport and Sellafield Power Station.

Pharmaceutical companies such as Bayer, Merck, Novartis, GlaxoSmithKline are already protecting their investments and people during refurbishments, maintenance, and expansion of their production capabilities with WES.

Dylan Garton is a cofounder of Skill Builder and freelance video producer, camera operator and video editor.
@dylan_motion
Previous Elastomers develop stronger bonds of attachment
Next The best cities for loved up tenants looking to rent together