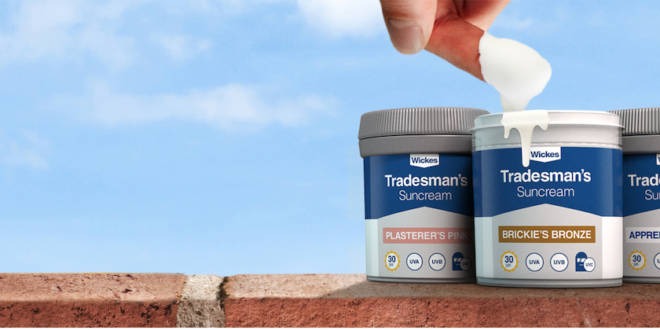 Melanoma skin cancer incidence rates have increased by an alarming 119% in the UK since the early 1990s and according to a recent study, construction has been identified as the industry sector in the UK whose workers are most at risk.

Now, new research by Wickes has revealed some startling statistics and unsettling attitudes to sunburn and skin cancer amongst tradespeople who work outdoors. The research of 500 tradespeople found that many are unaware of the dangers of not protecting their skin and ill-informed on how often sun cream should be applied.

Worryingly, one in ten (9%) admitted that they don’t wear sun cream because they’re worried that their workmates would laugh at them, while 91% of respondents were unaware of how much sun cream was required during a typical 12-hour summer’s day.

Over a quarter (26%) believed that only two applications would suffice, and 15% were convinced they’d only need to apply it once to be protected for the full 12 hours. In fact, it is recommended that sun cream should be applied 30 minutes before being exposed to the sun, and re-applied every two hours thereafter; meaning that sun cream should be applied up to six times during a 12-hour shift.

As a result, Wickes have announced that they will be offering free sun cream to tradespeople as part of a new trial. Available in stores nationwide from 23rd August, members of the trade can pick up a free tub of Brickie’s Bronze (30SPF), Plasterers Pink (30SPF) or Apprentice White (30SPF) while stocks last.

Matthew Gaunt, Head of Brand & Communications at Wickes comments: “It is clear that there’s a real need here and we want to help tradespeople working outdoors get to grips with this issue.”

“We hope that by trialling Wickes Tradesman’s Suncream in our stores, it helps raise awareness of an important issue within the industry, as well as making protection from the sun’s rays more accessible to tradespeople in the UK.”

According to the Institution of Occupational Safety and Health (IOSH), getting burnt just once every two years can triple the risk of melanoma. Over half (52.8%) of tradespeople surveyed admitted to getting burnt at least once every year whilst working, with those based in London by far the worst offenders at almost 1.5 x the national average (72%), and a further 17% experiencing sunburn on the job at least ten times every year.

Dr Lesley Rushton, Department of Epidemiology and Biostatistics, Imperial College London comments: “We have estimated that around one construction worker every fortnight will get a melanoma caused by sun exposure at work.

“Occupational solar exposure is often overlooked but it is so important that tradespeople are well informed about the potential implications of being sunburnt, and that they take the necessary steps to minimise their risk.”

Despite the high levels of sunburn within the industry and the serious potential implications, a surprising number choose not to apply sun cream; 39% of 16-24 year olds don’t apply sun cream because they simply can’t be bothered, and a further 39% also neglect to do so because they’re ‘working on their tan’.

Perhaps most shocking of all, almost one in ten (8%) choose not to apply sun cream because skin cancer ‘doesn’t run in their family’, a claim which shows a concerning lack of awareness surrounding skin cancer in general.

In fact, a person’s chances of inheriting skin cancer are relatively slim and 90% of skin cancers are avoidable. It is estimated that 86% of skin cancers are caused as a direct result of exposure to solar radiation, rising to 90% in men which is particularly relevant in such a male dominated industry.

Dylan Garton is a cofounder of Skill Builder and freelance video producer, camera operator and video editor.
@dylan_motion
Previous Hilti Service Centre – How Can They Repair Your Tools in 3 Days?
Next Untrained Scaffold Worker Left in a Coma