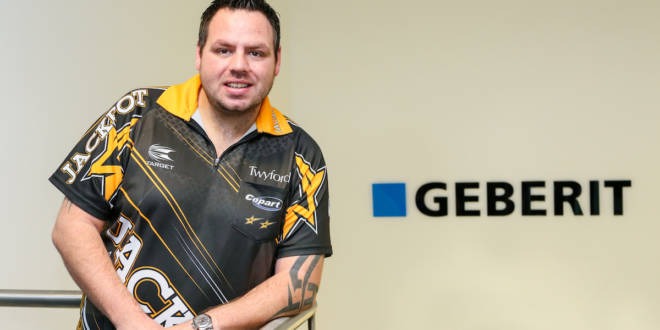 Geberit, the sanitary products expert, has extended the sponsorship of darts champion Adrian Lewis for a further three years.

Adrian Lewis has established himself as one of the sport’s leading stars over the past decade since emerging as a teenage prodigy. Two times winner of the PDC World Championship, Adrian has also racked up titles including the UK Open 2014, the European Championship in 2013 and the World Cup of Darts in 2012, 2013 and 2015.

“Darts has become a hugely popular spectator sport in the UK, so much so that the World Darts Championship is the most watched non-football programme on the major sports channels,” comments Geberit Marketing Director Raffaela De Vittorio. “We are therefore delighted to be continuing our sponsorship of Adrian Lewis when his original contract with Twyford ends in May. We’ll be watching his efforts to claim the world title with interest and wish him all the best.”

Roger Bisby is an English television presenter and journalist, known for his expertise in the British building industry.
Previous Scaffolding Firm Fined for Serious Fall
Next Kensington and Chelsea bans weekend construction work