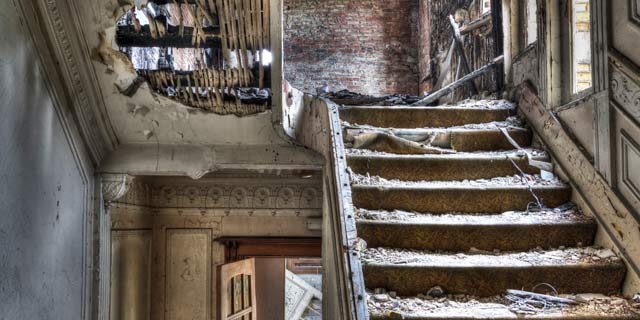 It’s raining again and it looks set to carry on for days. My daughter phoned to say that the problem of damp around one of her windows has returned. She lives on top of a hill and the gable end of her house catches everything that nature can chuck at it. We have had all summer to fix the problem but we left it. Somehow when the weather is topping 28 deg centigrade it is hard to think about damp. In our defence she is going to have the house extended next year so she was hoping it might be OK until then. It isn’t and if there’s a break in the weather I will be up there with some Dry Zone solution giving it a quick going over.

That sticky door lies between you and a lifetime of drudgery, it’s your finger in the dam…

Meanwhile back at my house there are things that need doing. There are always things that need doing. My wife has a list as long as her arm and it never seems to get any shorter. A bloke I know told me a long time ago that you should never fix that sticking door or whatever it is that your partner constantly complains about. His idea was that if you did that job another one would be sitting in the holding bay ready to take its place. You would never be free so the best strategy is to hold your ground against the onslaught.

“Never break ranks. That sticky door lies between you and a lifetime of drudgery, it’s your finger in the dam” he said.

I liked him, he was completely un-reconstructed but amusing. He gave me lots of advice, most of which I failed to heed. I fixed the squeaky door and – he was right – I haven’t stopped since.

I bumped into him the other day – no not in the builders’ merchants – and he has retired. He has a nice new apartment with a balcony overlooking the golf course.

“Any sticking doors?” I asked.

He looked at me nonplussed, so I reminded him of his advice.

He laughed, “Ah that, no there are no sticking doors, not yet, but if one starts to play up my wife sorts it out she has learned a lot over the years”.

“Goodness no, she gets someone in”.

Roger Bisby is an English television presenter and journalist, known for his expertise in the British building industry.
Previous The damp conundrum
Next A curious incident