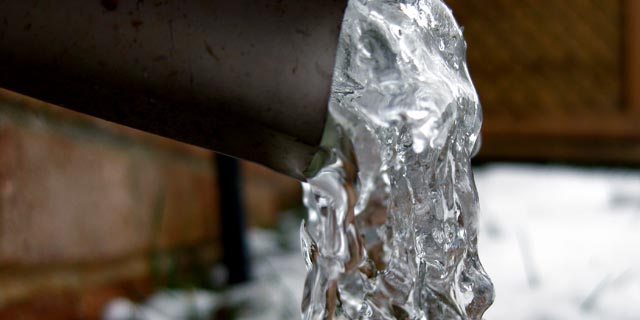 Condensing boilers have undoubtedly become more reliable over the last few years but the last couple of winters saw thousands of householders caught out by frozen condensate. Manufacturers offer clear guidelines for avoiding freezing but not every job offers the opportunity to do things by the book and terminate the condensation inside the building. If the pipe runs to an outside drain then there is always a chance that it will freeze. In response to this, we now have a number of products on offer which will stop condensate pipes from freezing. Invariably these use electric trace heating (electric blanket) for the pipe. An average cost for fitting trace heating is around £200.

…installers are being advised to redouble their efforts to find somewhere inside the building to terminate the condensate.

The question is who pays? If you’ve had a boiler fitted in the last few years and have suffered a breakdown due to the condensate freezing, you might reasonably expect the person who installed it to carry out the remedial action free of charge on the grounds that the boiler was not fit for purpose. However, it seems that many installers are arguing the point saying that practice of lagging the pipe should have been enough under normal circumstances to prevent freezing and the only reason the pipes are now freezing is abnormal weather. In other words, the boiler will work fine so long as it doesn’t get very cold. Some would say that this misses the point.

The quick fix offered by many installers and manufacturers last winter was to take a kettle of hot water and pour it over the condensation pipe. It’s a very British solution to, ‘put the kettle on’ and the site of people out in their dressing gowns at 6am with steaming kettles has a kind of pathetic charm.

In the longer term installers are being advised to redouble their efforts to find somewhere inside the building to terminate the condensate. Ideally, this will be a soil stack or waste pipe from a kitchen sink but I give full marks to a heating installer I came across the other week who found a handy soil and vent pipe close by to put his condensate into. He drilled a hole and fitted a strap on boss (sounds pornographic if you aren’t a plumber) and left the boiler in good working order.

A few hours later the householder called to say that there was dripping coming through the ceiling. The installer, being a psychic, said he knew the cause without even coming back to the house. It was the WC upstairs which was leaking. The householder found it strange that this should happen at the very time the boiler was fitted and the dripping had stopped since he switched off the boiler but the installer insisted that it was nothing to do with him and told the householder that coincidences must happen otherwise there would be no such word as ‘coincidence’. Not only was it nothing to do with him but he wasn’t interested in fixing the problem because he was a heating installer and not a plumber. He hadn’t spent thousands of pounds gaining his gas safety certificates just to end up messing about with bogs.

So it came down to me, a lowly jobbing plumber, no job too small. It took me less than five minutes to track down the leak. It wasn’t coming from the WC at all; it was dripping out of the ceiling fan.

The reason it was dripping out of the ceiling fan was that the installer had terminated the condensate into a length of grey plastic soil pipe that he took to be the vent section of the soil and vent pipe. It was in fact the vent duct from the extractor fan. Mistakes happen and I wouldn’t judge him too harshly on this one except for the fact that he still wasn’t putting his hands up to the error. He had taken the pipe to be a soil pipe in good faith when he had put in the estimate and the fact that it wasn’t meant that he now had to run the condensate pipe some considerable distance to pick up the said soil pipe. Suddenly he was the aggrieved party.

The householder was faced with a bill for another £200 to do the job properly, or he could poke it out of the wall and take responsibility for it freezing. But if it did freeze all he would need is a kettle full of hot water.

Roger Bisby is an English television presenter and journalist, known for his expertise in the British building industry.
Previous Building Site from Hell
Next Rustic Appeal