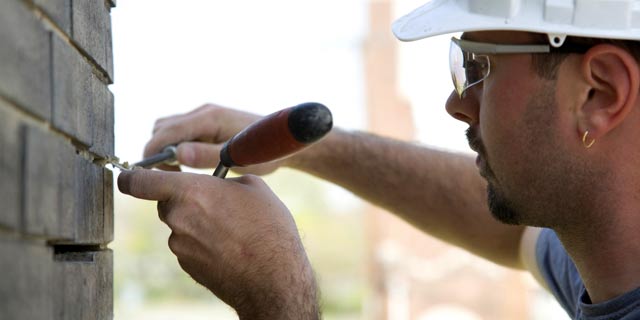 I have been re-pointing some brickwork this week. Despite having a shed full of various pointing guns I was doing it the old fashioned way with a hawk and a Marshalltown tuck pointer. The reason for using hand tools as opposed to the compressed air gun was simply to reduce noise. The customer has a one week old baby and I didn’t want the compressor kicking in and scaring the living daylights out of the poor mite. So I had a very pleasant couple of days out on the scaffold tower watching the world go by and listening to the birds sing. My builder friend Steve dropped in to see me and made a comment about having to be brain dead in order to enjoy pointing. OK, I am brain dead but it is stress free and the repetitive nature of the work is strangely satisfying. This is probably because I don’t do it day after day for the rest of my working life. It is in effect a holiday.

…the big difference between what they were doing and what I was doing was the magic ingredient of being outdoors.

When I was a kid I used to see television footage of car workers on assembly lines. They were on the news because they were on strike. That happened a lot in the sixties and even at my young age I had a great deal of sympathy. Faced with the nature of their work, the noise and the grim prospect that they would be doing it day in day out until they won the football pools, I would have found any excuse to walk out into the sunshine.

The big difference between what they were doing and what I was doing – pointing brickwork – was the magic ingredient of being outdoors. A lot of building workers like being out in the open, it’s why they joined. Admittedly it isn’t much fun in January but there is still something appealing about it. Whenever some bright spark comes up with yet another system-built house put together in the factory and hails it as the end of site built housing I hang my head low. Yes it is more efficient and probably cheaper, it may even have better quality control but it isn’t nearly as much fun. The measurement of job satisfaction isn’t something that economists think much about. The fun footprint is not measured in the way that carbon is. That is a shame because it figures large in people’s lives. It would be nice to have a little stamp on products saying that the maker enjoyed making it. I would put one on my brick pointing, a little smiley face hidden in the mortar lines. A little message for the future generations of builders.

Roger Bisby is an English television presenter and journalist, known for his expertise in the British building industry.
Previous Why help to buy?
Next Why Your Shower Tray Leaks