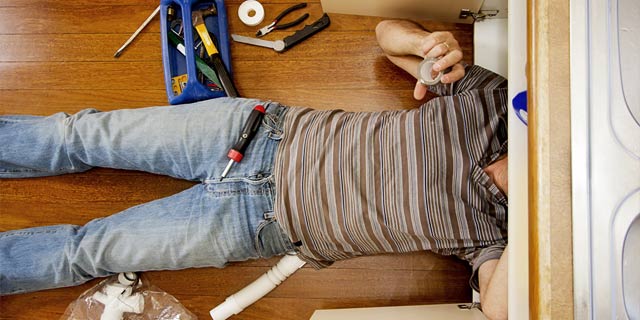 I have always been a sucker for a challenge. If someone tells me that they have a problem that nobody has been able to fix, I am there. Rising damp is not usually baffling but rising damp in a third floor flat is. Yes I do mean rising damp and not penetrating damp, the proof being that some of it was on internal walls. But where was it coming from?

The homeowner, a well known television and radio presenter, had been royally ripped off. I am not sure it was completely intentional as in, ‘he’s famous and has loads of dosh so I will take some from him’, but when you get someone who has a bob or two there’s not the same tendency to be cautious as there would be with a vulnerable pensioner. So in they went, these damp specialists, and hacked all the plaster off the internal walls injected them and applied waterproof render and new plaster. It made a right mess and the whole flat had to be redecorated. It cost thousands but they guaranteed the work. Six months down the line the damp was creeping back and the homeowner couldn’t get them to answer his calls.

…the fact that the damp kept coming and the whole place was growing mouldy suggested that the plumber had got it wrong.

Then he got in touch with a plumber who came round and told him that it was very likely a pipe under the screed which was leaking. It was a good hunch because the damp seemed to be concentrated around all the radiators. His cure was to cut off all the under floor pipework and run it on the surface. This meant taking the pipes up and over the doorways with little air release valves at the high points – in a luxury London apartment one thing was certain, it didn’t add value.

The plumber took his money and told the homeowner he would have no more trouble. You can sort of see why he was so confident. There were no more pipes under the floor and as it clearly couldn’t be rising damp on the third floor what else could it be? Personally I would have started from that point rather than ended on it. It could be the heating pipes but what else could it be?

The fact that the damp kept coming and the whole place was growing mouldy suggested that the plumber had got it wrong. At the point where I got involved the home owner was about to hire a surveyor.

“Let me take a quick look first,” I said.

“Ok, but I don’t see what you’ll be able to find out if the others haven’t solved it.”

Then I said the magic words. “If I don’t solve it I won’t charge you a bean.” And he was hooked.

I soon noticed that there were ducts in the floor which had carried the heating pipes from the boiler to the radiators. If the central heating had been leaking these would have provided a perfect distribution network around the flat so you could see where the plumber was coming from but why didn’t he pressure test the heating before cutting it off? Whatever the reason he had now taken all the live pipework above the floor so it couldn’t be that.

So what else could be leaking into those ducts? The first thing I did was trace the route of the ducting by tapping on the floor and listening to the hollow sound of the screed. It ran along the hallway and into the bathroom and under the bath to the airing cupboard.

I removed the bath panel and could see the uncovered duct running under the bath. It ran right along the middle between the bath feet and right under the bath waste. The little flexible overflow pipe which is normally just a push fit onto the bath overflow spigot had come loose and was dangling in the duct. Every time the man or his partner had a shower or a bath, the water would pour out of the flexible hose into the duct and out through the mini canal system to the point where it met the walls.

I grabbed a Jubilee (worm drive) clip from my van, reattached the hose and secured it to stop it from ever dropping away again.

“I will guarantee that job for life”, I said and I meant it because there was no way it would ever come off even if you tugged at it which begs the question. ‘Why don’t manufacturers include a clip on those hoses in the first place?’.

Don’t tell me, I already know the answer. They have a responsibility to a small army of tradesmen depending on the work it creates.

Roger Bisby is an English television presenter and journalist, known for his expertise in the British building industry.
Previous Why Your Shower Tray Leaks
Next Holding your ground