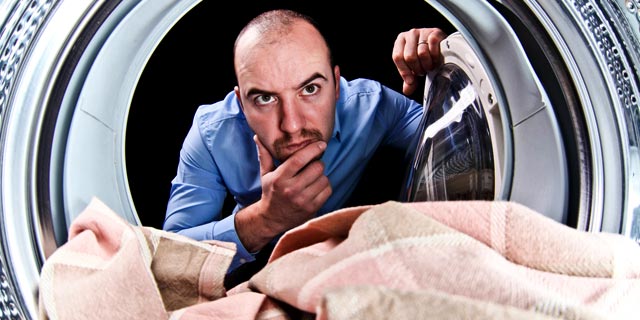 I had a call-back on a job today. The kitchen unit doors were knocking together. I assumed it would just be a simple matter of adjusting the self-closing Blum hinges and I would be on my way. It turned out that the hinges causing the problem were not Blums but the hinges attached to the washing machine.

For those of you in any nation but Britain I must just explain that we have this odd idea of putting the front-loading washing machine in the kitchen. Don’t ask me why it’s just the way it happens to be. Obviously we don’t like it because we then attempt to hide it behind a cupboard door so all you can see is a clean row of cupboard doors. There are two ways of doing this. One is to leave the doors on the cupboard carcass and the other is to attach the door to the washing machine itself. The problem is that washing machines, especially front loaders, have a tendency to move slightly when they are in fast spin. Given that the gap between cupboard fronts is around 5mm on each side you can appreciate that you are on a hiding to nothing in trying to maintain that gap.

“So what” asked the customer “is the solution?” I thought for a while and eventually in desperation suggested. “The only solution is to remove the decorative door and expose the naked front of the washing machine”.

She was horrified. The idea of spoiling the nice clean line of kitchen cupboards with a washing machine front was so abhorrent that she could hardly believe I had dared suggest it. What kind of Philistine was she dealing with?

What I should have done at that point was tell her that there are some things in life that aren’t fixable but something in me resists that piece of logic.

I played around with the feet and repositioned the machine centrally. Then when her back was turned I took a couple of her tea towels and rammed them deep down into the gap on either side of the machine. I used a long spatula to make sure they were so deep that she wouldn’t detect them. In engineering you might call it a shim which makes it sound a whole lot better than a bodge.

Roger Bisby is an English television presenter and journalist, known for his expertise in the British building industry.
Previous Under-floor Timebomb
Next Lost in Construction